Friday morning we spent in Figeac, and then we took the bus through the Valley of the Lot on to Cahors. (Rail service linking these two cities is frequent & inexpensive, but Friday was a strike day, so we took the bus – which was not affected.

We had breakfast at our hotel, then ambled around Figeac until 10:30, when the Musée Champollion opened. This is a French national museum named for the decipherer of the Rosetta Stone, Francois-Joseph Champollion, a native son of Figeac.

The museum collection and its interpretation of the development of writing, along with its varieties and technologies, are outstanding. Wikipedia has good coverage in English. 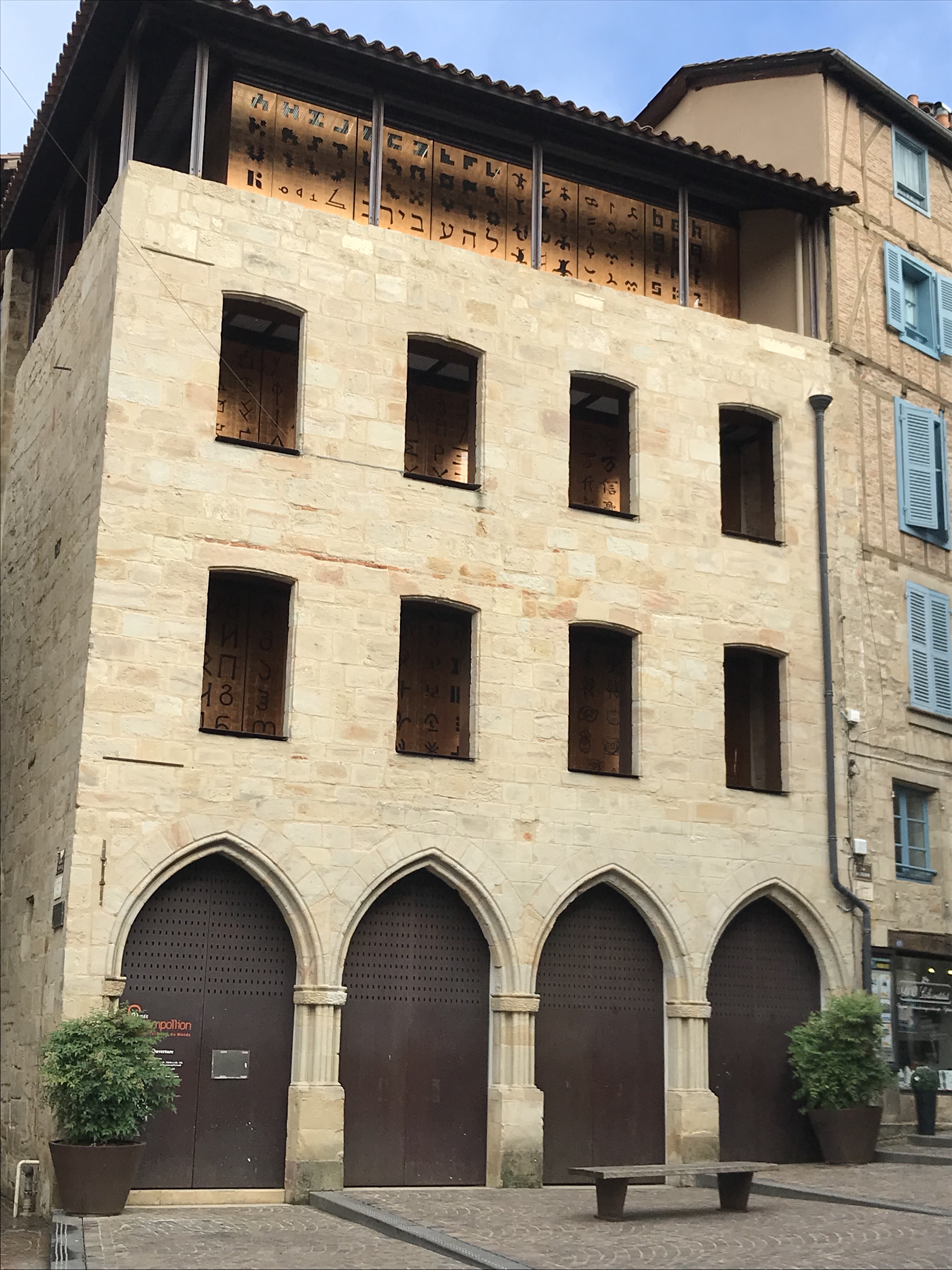 Exterior of the museum. Note the panels with characters from various scripts behind the window openings.

One unanticipated feature of the museum is a courtyard behind it paved with a giant-scale replica of the Rosetta Stone. We caught it after it had been freshly washed and before many people had walked in it: 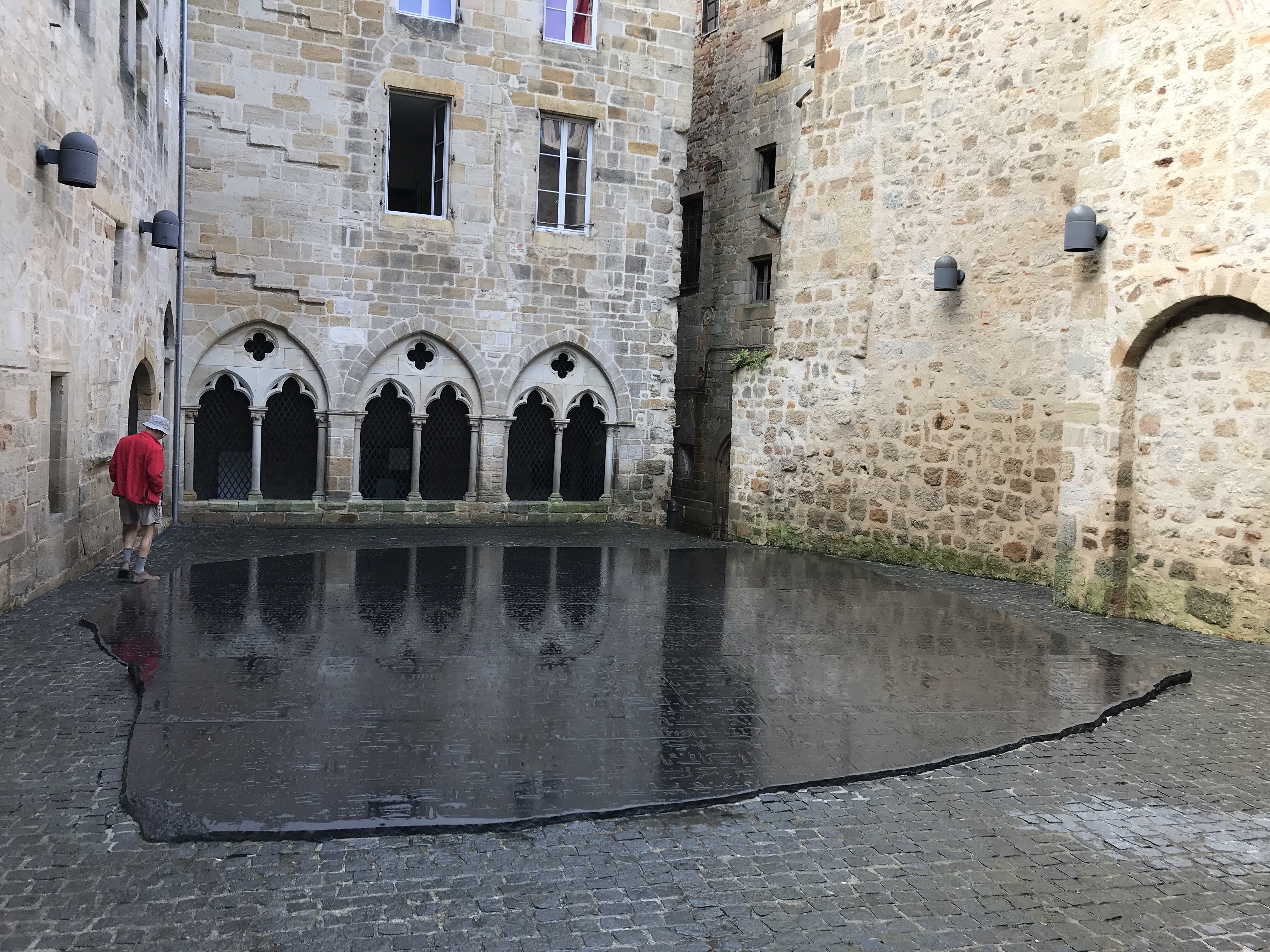 And here’s an interesting door from the same neighborhood: 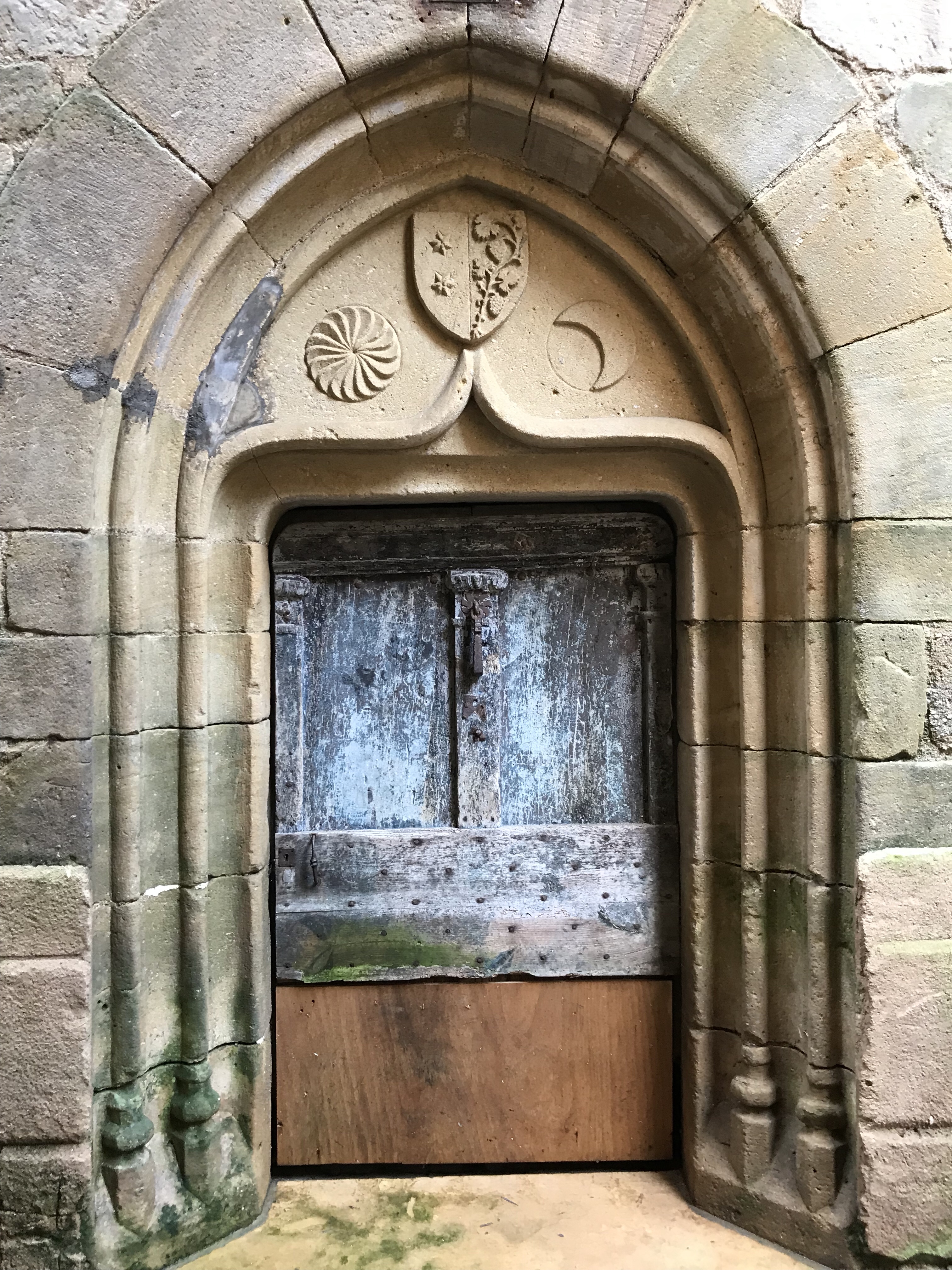 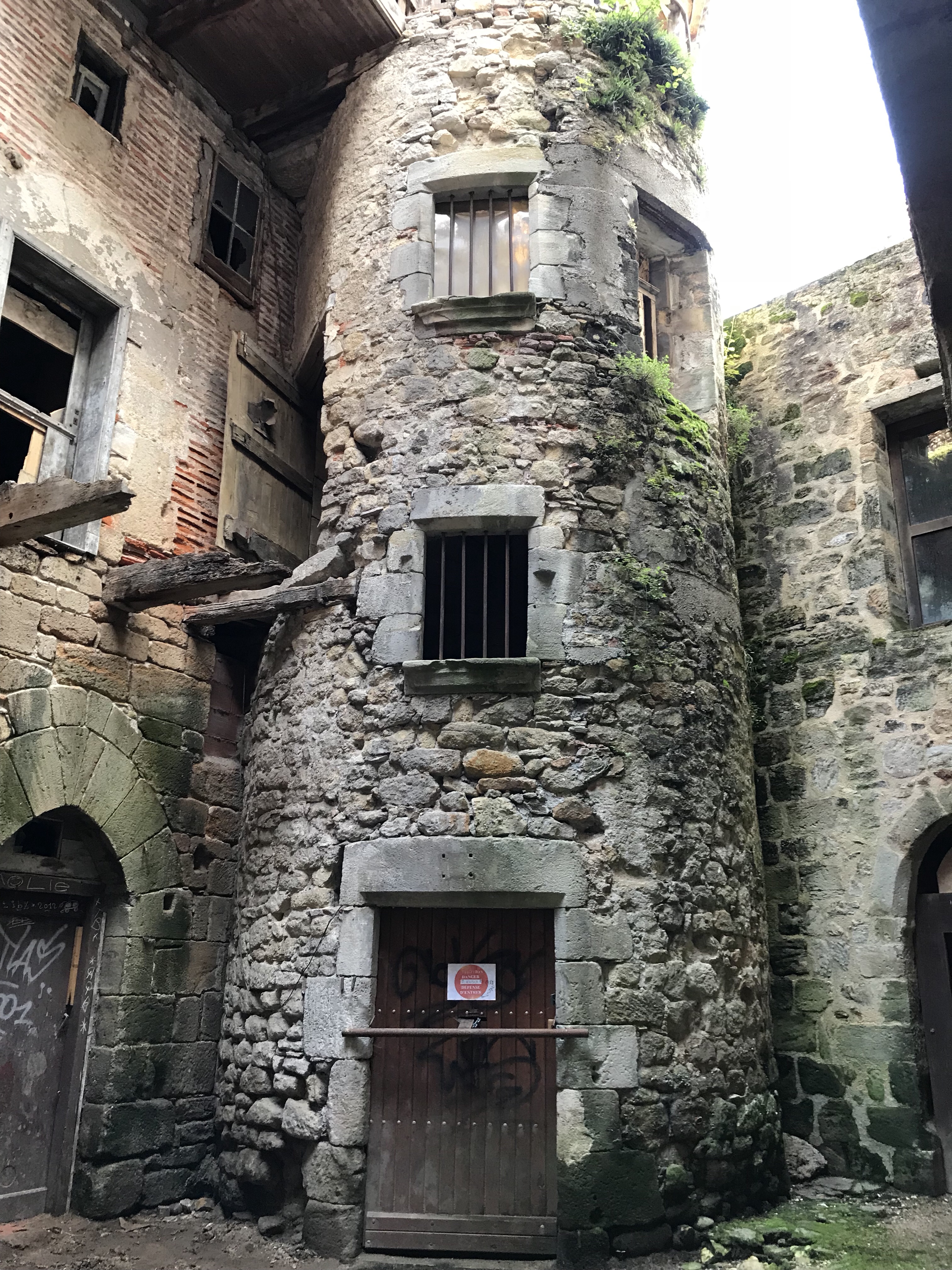 After a quick lunch, we walked to the train station to catch the bus for Cahors, which is west of Figeac about an hour and 30 minutes. Initially our route wound though the valley of the Célé (Figeac is on the Célé), but in time we found the road that adjoins the Lot. The river is wide and windy, and along most of it are stunning limestone cliffs rising steeply almost at the river’s edge. In a few places, space for the roadbed has been notched out of the base of the stone face, barely clearing the roofs of trucks and buses. (We returned to this area on Sunday, and will be sharing some photos then.)

On arriving at Cahors, we rented our car, checked into our hotel, and then set out on foot to explore.

Our hotel, near the SNCF station, is a short walk to the main drag of Cahors, and just beyond is the historic district. We stopped for a cup of tea and a sweet (tarte au citron) on a square near the St. Étienne church. While looking around, we noticed a yellow wooden framework perched high, connecting two trees — not a ropes course as we first thought, but a sculpture! 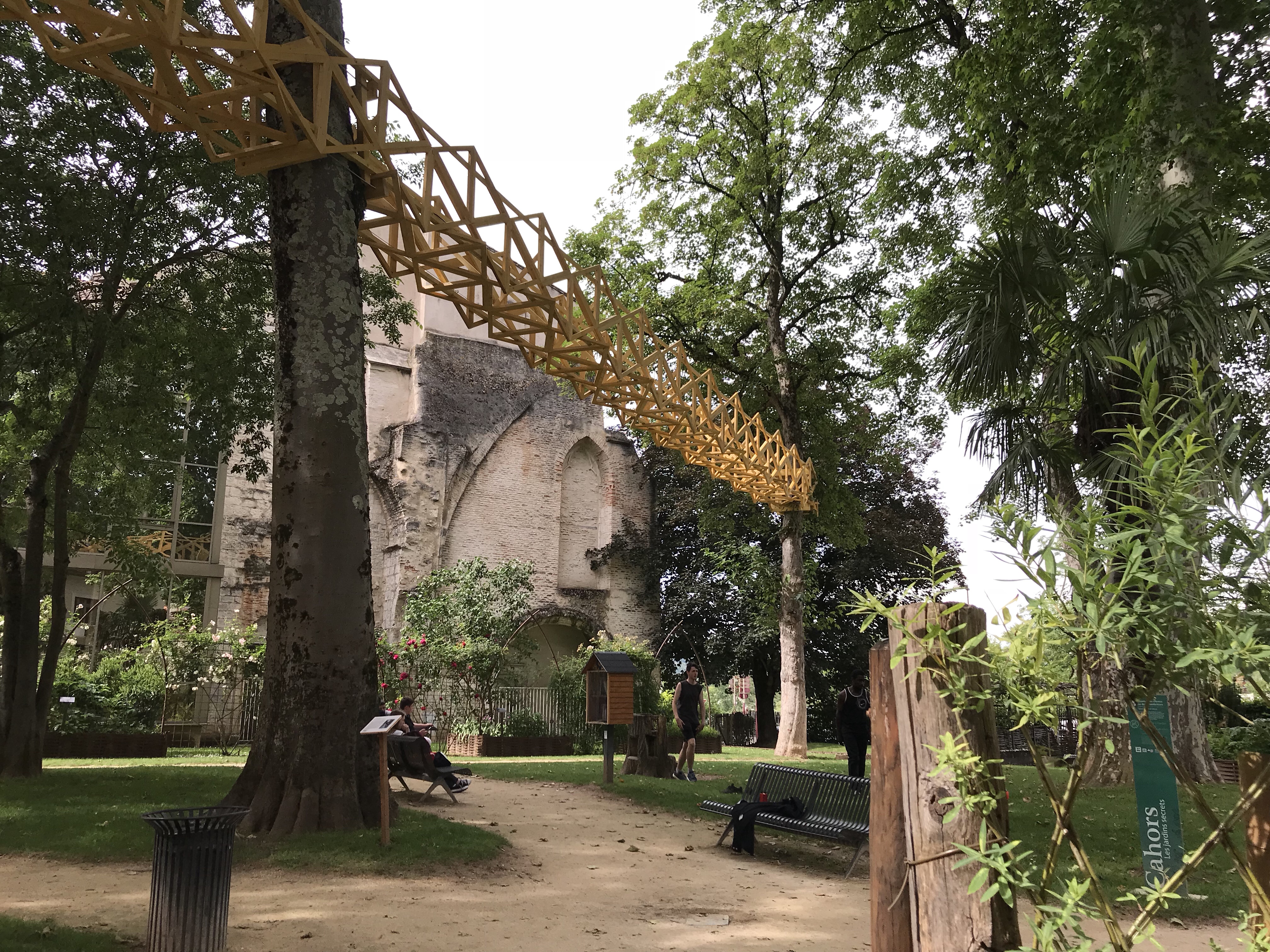 The church is surrounded by a commercial and residential neighborhood. The first reaction I had was of great solidity and stability. It’s a large structure that dominates one’s view, whether you’re close or not. It’s hard to pick the style. One interesting feature of the interior is a wall of contemporary stained glass windows.

Inside, the sanctuary enclosed an amazing amount of space. There are three domes on the roof. One is painted in a style that appears ancient. 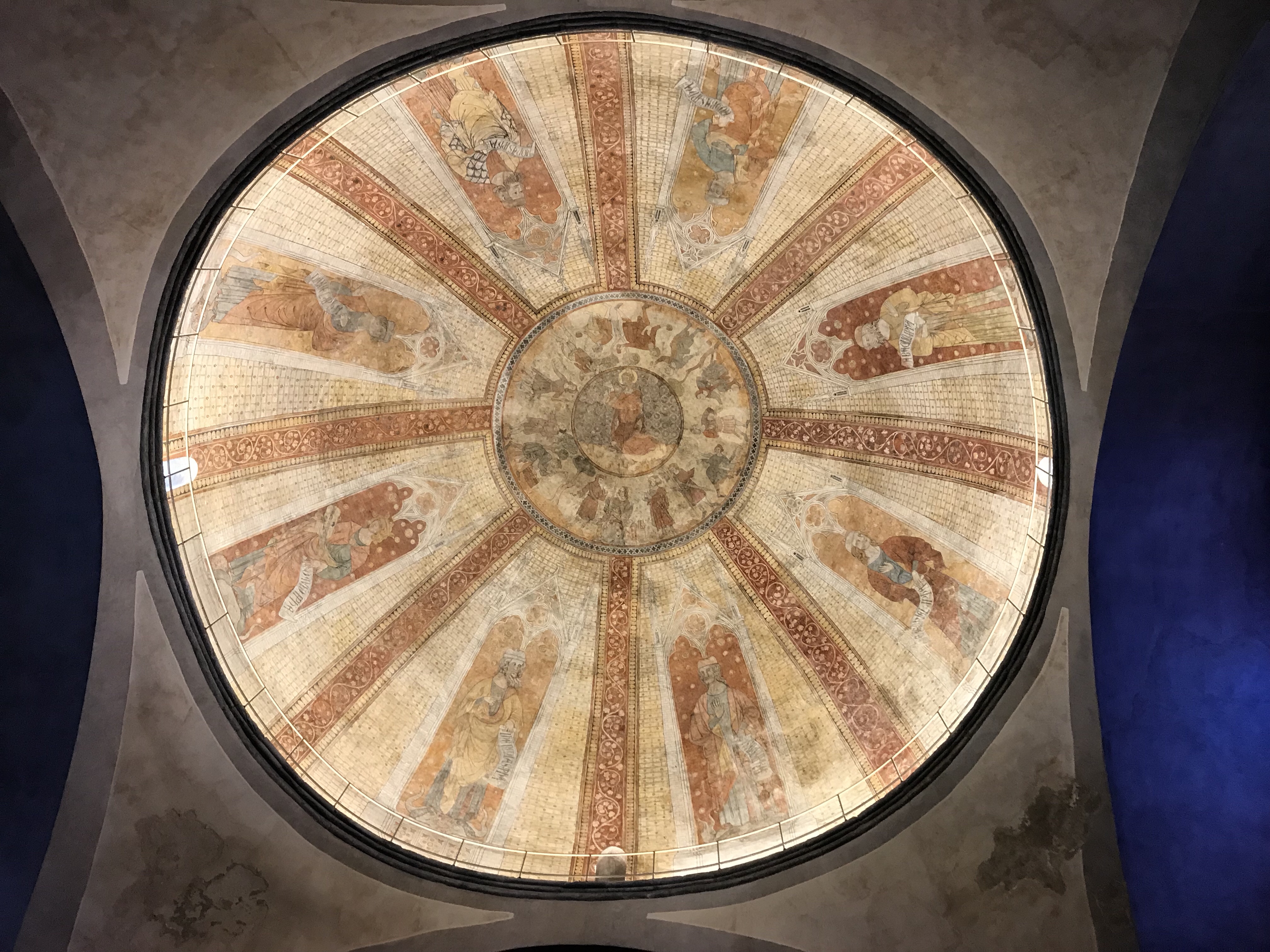 Finally, we saw this sculpture in a plaza as we were approaching the church. There was no indication of the artist or title. It’s a powerful work: 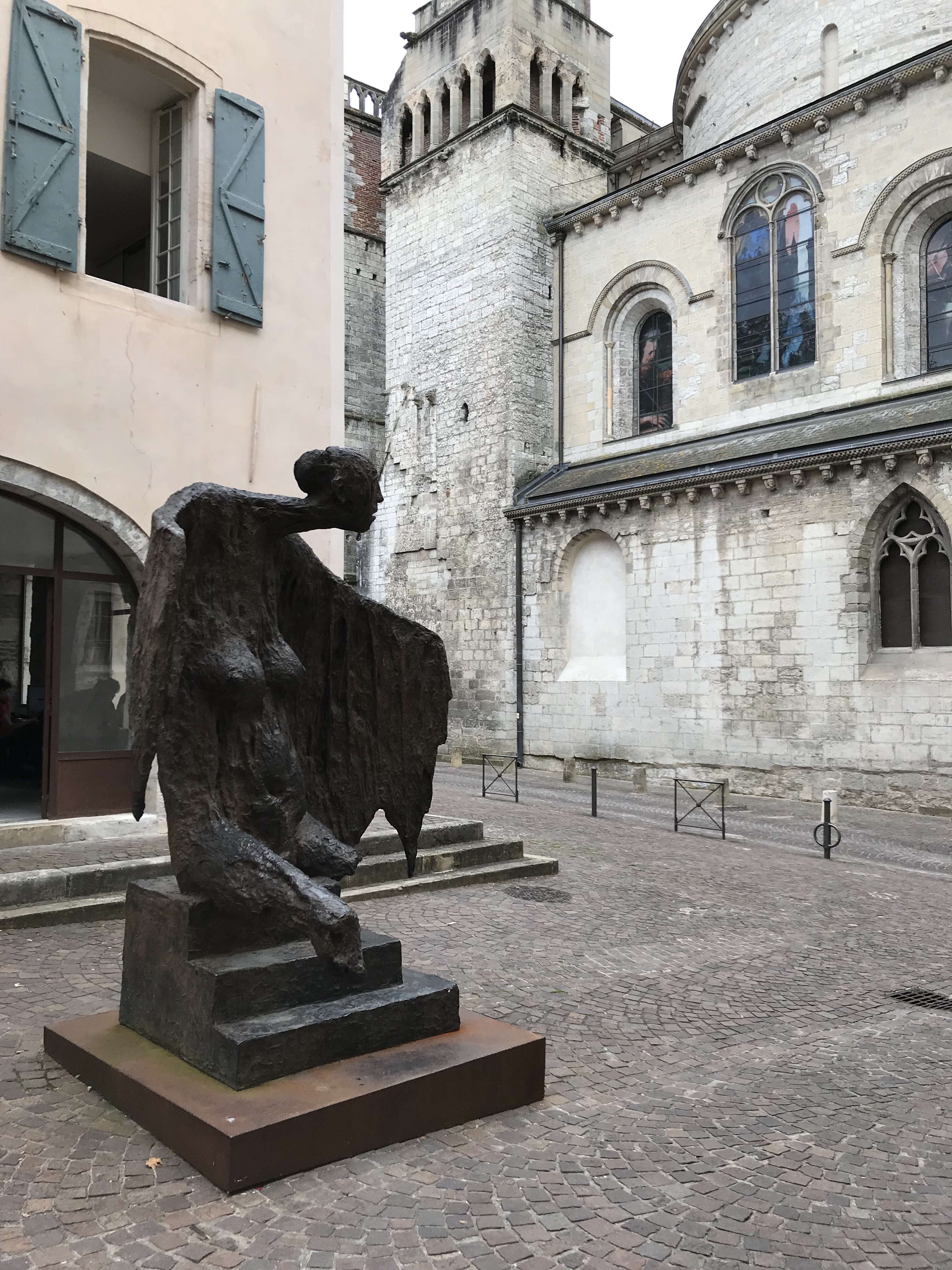